In the search for exoplanets, we have primarily focused on finding planets around stars like our Sun, called G-dwarfs. While it makes sense to search around what we’re familiar with, the problem is that stars like our sun are in the minority — the vast majority of stars in our galaxy are smaller, cooler stars known as M- and K-dwarfs. Furthermore, recent discoveries by the Kepler Mission have shown that M- and K-dwarf stars are more likely to harbor rocky, terrestrial planets like Earth, compared to gaseous giants like Jupiter and Saturn. Thus, wouldn’t it make sense to expand our horizons and focus more on M- and K-dwarfs in our search for Earth-like planets? 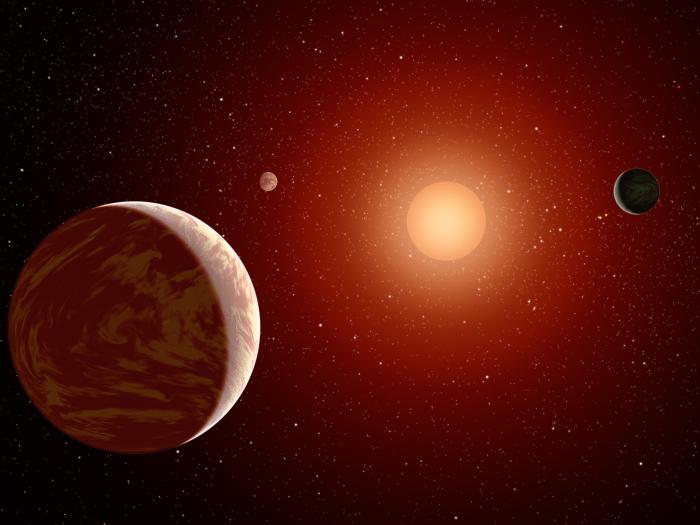 There are some that worry about significant physical challenges to forming and sustaining a habitable world around M- and K-dwarf stars, with most of these worries arising from a mechanism known as “tidal locking”. Two bodies in orbit around each other will exert gravitational tides — take our own Earth and the Moon for example. The tides from the Moon cause Earth’s water to bulge towards and away from the Moon. As Earth rotates through this bulge, we observe high and low tides on the beach (totally tubular, thanks bro-Moon!). Over time, these tides exert friction that slow down the Earth, such that most dinosaurs experienced an 21-hour day, compared to our now 24-hour day. (So yes, this Monday really did last longer than the last, but only by a few milliseconds). Similarly, the Earth exerts a tide on the Moon, but since the Earth is far more massive, it is a far stronger tide, enough to have long ago slowed down the Moon so that it only shows one face to us. The moon is “tidally locked” with its rotation period the same as its revolution period about the earth, both equal to one month. (Or, one “moonth”, as an old professor of mine loved to say.)

You can probably see where this is going. Exoplanets around M- and K-dwarfs have to be much closer to their host star, than Earth is to the Sun, in order to have habitable temperatures. Since tidal forces increase dramatically with decreased distance, we thus expect most exoplanets around these stars to be tidally locked. What’s the big deal you might ask – going around a star once a day means I get to celebrate my birthday every day right? True, but at a cost. The one side facing the star would be in perpetual daylight, and the other side facing away plunged into perpetual night. This could cause all the water and atmosphere to boil off on the day side, and freeze on the night side, thus leaving no liquid water or breathable atmosphere for life to develop in. Furthermore, M- and K-dwarf stars tend to be very magnetically active, producing large stellar flares that might strip a planet’s atmosphere, or destroy any complex molecules. While a planet’s magnetic field can protect it, there have been worries that a slowly rotating, tidally locked planet would be unable to produce a magnetic field. Sounds like pretty abysmal conditions – it might make sense why we haven’t been looking at them.

Or we might realize we’re pessimistically over-simplifying things. Recent studies have shown that tidally locked planets, with a thick enough atmosphere, could produce large enough winds such that the day and night sides wouldn’t have such drastically different temperatures. Furthermore, other studies have shown that the magnetic field strength of a planet has less to do with its rotation, and more with the size of the planet’s liquid core. And now a new study has come out that many of these planets might not even be tidally locked to begin with!

A recent Science paper by Jérémy Leconte and co-authors has run the complex calculations based on a simple idea. Winds on Earth, and other planets, are generated by the light from the Sun as it’s absorbed by the atmosphere and converted to heat. This wind constantly runs into mountains, water, and other obstacles on the surface, usually in a global west-to-east pattern. This wind energy is deposited into the planet’s rotational energy, thus helping to speed it up or slow it down. It’s an incredibly tiny force day-to-day, but over billions of years it can really add up. For many planets around M- and K-dwarfs, Leconte and his team found that it was sufficient to greatly increase the planet’s rotation speed and stave off tidal locking. Thus, we see again our simple assumptions are really too simple – habitable worlds may be very common. William Herkowitz at Popular Mechanics has a great article on the paper for further reading: http://www.popularmechanics.com/science/space/deep/earth-like-exoplanets-around-dwarf-stars

I can’t help but think of a civilization out there like ours, orbiting an M-dwarf star, and conducting their own exoplanet surveys. Two alien scientists happen upon an unassuming yellow G-dwarf star on the outskirts of the Milky Way. “What about this star. Think we should take a look?”, asks one of the alien scientists. The other responds, “A G-dwarf?! Are you kidding? They tend to have massive gaseous planets form around them, which are likely to disrupt the formation of nice rocky planets like ours, or even hurl giant asteroids at them. And do you know how much ultraviolet radiation those stars produce? No way could DNA or other organic molecules form on a planet around a star like that, and any planet would be spinning so fast there’d be no place to hide from its deadly star! Let’s just keep focusing on nice red stars like our own – besides most of the stars in the galaxy are like ours anyway.”